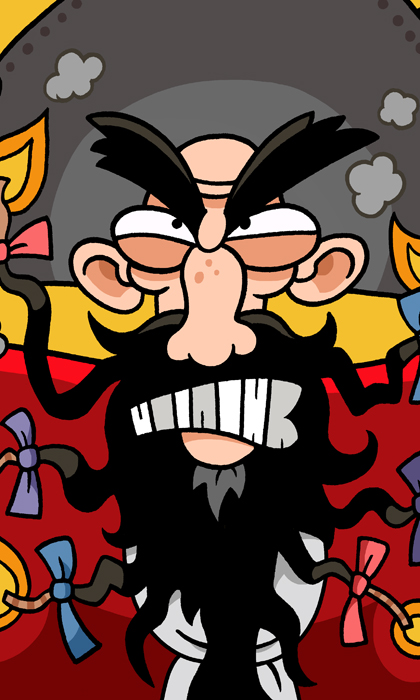 A master of intimidation, Blackbeard purposely tried to look as crazed and demonic as possible. He was tall and gaunt and was famous for tying ribbons and lighted fuses into his long, black beard. Like many pirates, he dressed in upper-class clothes stolen from wealthy victims.

Why is Blackbeard famous?

Blackbeard was the most infamous pirate in American history.

When did Blackbeard live?

Historians do not know Blackbeard’s exact date or place of birth, though the year is generally pegged around 1680 and the most likely place was Bristol, England. His real name is not fully known either — during life, he went by Edward Thatch (or some alternate phonetic spelling, often Teach) but this may have been an alias. He was nicknamed “Blackbeard” at the peak of his fame. On November 22, 1718 he was shot and stabbed to death in a vicious battle with sailors from the Royal Navy aboard the ship HMS Jane in waters around Ocracoke Island, North Carolina.

What did Blackbeard do?

Few hard details are known about the early life of the man who would become Blackbeard, but it’s generally believed he was born in the English port city of Bristol and left for the New World in his teens. Settling in the British colony of Jamaica, young Edward Thatch probably worked as a sailor on merchant ships as a young man, becoming a knowledgeable seaman in the process. During Queen Anne’s War (1702-1713), the American front in the larger War of the Spanish Succession (1701-1714), he turned to the lucrative business of privateering, in which the British commissioned civilian ships to harass and rob French and Spanish vessels. Following the war’s conclusion — and the end of legalized privateering — he shifted to piracy, joining a gang of other ex-privateers who had established a pirate colony in the Bahamas.

Impressing other pirate leaders with his energy and intelligence, “Blackbeard” quickly outshone his mentors, amassing a crew of hundreds of men and a fleet of four ships, led by the massive Queen Anne’s Revenge — a former French slave ship refurbished with dozens of cannons. A strategic mastermind who pursued piracy with a businesslike seriousness, between 1713 and 1718 his men terrorized merchant vessels in the Caribbean and east coast of America with daring raids and creative maneuvers, robbing goods like food, liquor, and tobacco to later resell for profit.

In the spring of 1718, Blackbeard gained worldwide fame for using his ships to stage a weeklong blockade of the busy port of Charleston, South Carolina — an unprecedented act from a non-military naval force. The spectacle embarrassed America’s colonial rulers, and on the orders of Governor Alexander Spotswood (1676-1740) of Virginia, a Royal Navy expedition headed by Lt. Robert Maynard (1683-1750) was dispatched to capture America’s most infamous outlaw, apprehending and killing the pirate leader near his gang’s makeshift base at Ocracoke Island, North Carolina. Though Blackbeard’s reign of terror had not lasted long, the audacity and sensationalism of his high seas crime spree earned him a permanent reputation as one of the most exciting villains of American history.

Popular culture usually portrays Blackbeard as one of the great monsters of history, a ferocious man who was psychotically bloodthirsty. In reality, Blackbeard was more of a calm, calculating professional criminal than a wild and violent thug. Though he was not above kidnapping, extortion, and blackmail, historians now agree that there’s little hard evidence Blackbeard ever personally killed anyone, and indeed rarely even instigated fights at sea, deeming such tactics too risky. Intimidation was his preferred tool, and through his frightening appearance and theatrical personality he deliberately fostered an exaggerated reputation for cruelty and unpredictability, knowing fear was his best leverage over sailors and governments.

Pirate culture in the early 18th century was deeply egalitarian, and despite his intense cult of personality, Blackbeard mostly respected these traditions. Though he could be a strong disciplinarian and was not above marooning or betraying crewmen he considered threatening or difficult, the proceeds of his plunders were shared mostly equally, and he was known to entertain his large crew with generous parties while on land. After plundering ships of enslaved Africans, he would often welcome the former human cargo to join his crew as equals.

Much of Blackbeard’s personal life remains unknown, and the gaps in the historical record have only helped increase his mythical status. One popular rumor holds he was a bigamist who was constantly marrying new women at various ports of call, though only one wife, a 16-year-old North Carolinian named Mary Ormond, whom he wed near the end of his life, has been confirmed. Unusually for a pirate — and indeed, many men of his time — Blackbeard was fully literate and kept detailed diaries of his adventures.