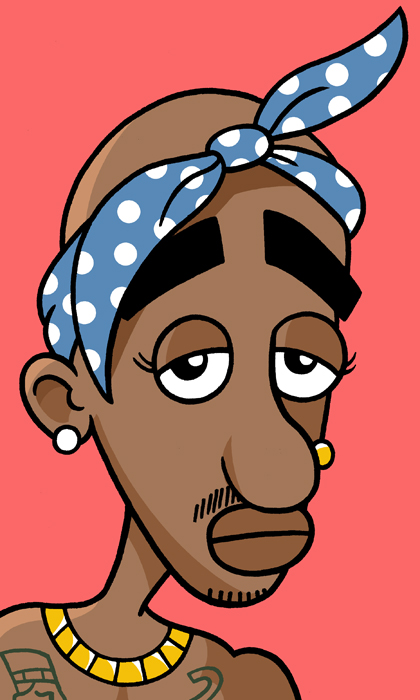 Tupac was considered very attractive though also a bit effeminate, which made him insecure. He had a lean, muscular body that was covered with tattoos and he enjoyed posing shirtless. Balding from a young age, he shaved his head and usually wore a bandana with a bow in front, which became his trademark.

Why is Tupac Shakur famous?

Tupac Shakur was one of the most influential American rappers of all time, and an icon of African American inner-city culture.

When did Tupac Shakur live?

Lesane Parish Crooks was born on June 16, 1971 in Harlem, New York. When he was a year old, his mother changed his name to Tupac Amaru Shakur, after an Inca rebel leader, as part of the Black Panther tradition of politicized names. As a rapper, he often used the spelling “2Pac” as his stage name, and sometimes went by Makaveli as well. On September 7, 1996, while riding in a car through Las Vegas he was shot four times and died of his injuries in hospital six days later, on September 13. His murder was never solved.

What did Tupac Shakur do?

Tupac was the son of Afeni Shakur (1947-2016), a high-profile member of the radical Black Panther Party who spent part of her pregnancy in prison. Despite growing up poor and often homeless, young Tupac briefly attended the prestigious Baltimore School of the Arts, where he excelled as a musician, actor, and poet. Eager to flee the grim social conditions of Baltimore, he moved to California in his senior year, but dropped out of school to pursue dreams of stardom. Impressing the Bay Area rap scene with his talents, he started doing backup work with local artists, and at age 20, released his first solo album, 2Pacalypse Now (1991), which went gold. It was followed by three more, Strictly 4 My N.I.G.G.A.Z. (1993), Me Against the World (1995), and All Eyez on Me (1996), all of which went platinum.

Tupac was one of the early pioneers of gangsta rap, a musical genre whose songs dealt with dark themes relating to life in America’s black ghettos, including drugs, crime, racism, poverty, and violence — topics familiar to Tupac’s own upbringing. Specifically, he sought to honor what he called the “Thug Life” mentality of inner city blacks; young men who maintained their dignity in the face of dangerous neighborhoods and deep social marginalization. Articulated in powerful singles like Keep Ya Head Up (1994), Dear Mama (1995), and Life Goes On (1996) his music described ghetto life with lyrics that could be crude and offensive, but often introspective, political, and self-critical as well. Overlapping with his rap stardom was a small but significant acting career in several well-received Hollywood films, including Poetic Justice (1993) and Above the Rim (1994).

Despite ever-growing fame and wealth, Tupac’s personal life remained chaotic and dangerous, and his final years were filled with crime and violence. In 1996 he was murdered in a drive-by shooting, and the abrupt, mysterious nature of his death elevated him to the near-saintly status of similarly tragic American celebrities like Elvis Presley and Marilyn Monroe. New albums released long after his death continued to go platinum, solidifying his status as one of the major American musicians of the 20th century.

Tupac Shakur had a charismatic, intense personality and impressed many with his fierce intellect and sensitive nature, defying traditional rapper stereotypes. Despite never graduating high school, he had a deep love of learning, particularly reading and memorizing great works of poetry and philosophy, and he took seriously the idea that his songs were substantial critiques of American society. Never a particularly happy person, he loved to argue, and was deeply defensive about himself and the inner-city blacks he claimed to speak for. He saw injustice everywhere.

Tupac was one of the most controversial American celebrities of the 1990s, with critics accusing him of promoting and glamorizing a deadly and nihilistic lifestyle. The fact that his own life was a constant swirl of crime and violence opened him to charges of reinforcing negative stereotypes of African Americans, and serving as a poor role model for those he claimed to champion. He often got into fights and was repeatedly arrested. In 1995 served eight months in prison after being convicted in connection to the gang rape of a 20-year-old fan. For picking fights with New York rappers Notorious B.I.G. (1972-1997) and Sean “Diddy” Combs (b. 1969), Tupac is considered a leading instigator of the frequently violent “West Coast vs. East Coast” rap feud of the 1990s, and through his last manager, the infamous Suge Knight (b. 1965), he was linked to the Compton gang Mob Piru. His murder, which many saw coming (including himself), was almost certainly a byproduct of this web of dangerous relationships.

His compassion for the suffering of others was real, however, and despite his often misogynistic rap lyrics, Tupac had tender relationships with women, particularly his mother. He drank prodigiously — his favorite liquor being Hennessy — and was a heavy user of marijuana.