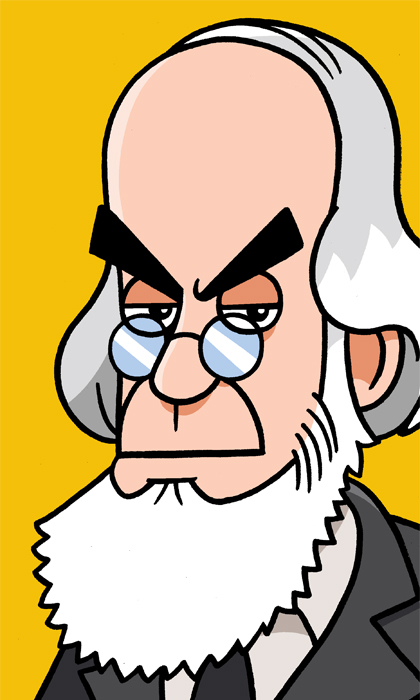 Russell was a large man, over six feet tall. He wore a full beard that many of his followers copied. Ironically, Jehovah’s Witnesses are generally against beards today.

Why is Charles Taze Russell famous?

Charles Taze Russell was the founder and first leader of the Jehovah’s Witnesses, a Christian denomination.

When did Charles Taze Russell live?

Charles Taze Russell was born on February 16, 1852 in Allegheny, Pennsylvania. He was sometimes called by his initials “C.T.”, and as his profile as a religious leader grew, he was often called simply “Pastor Rusell.” He died of a bladder infection at age 64 while on a train passing through Pampa, Texas on October 31, 1916.

What did Charles Taze Russel do?

Charles Taze Russell spent his early life in Philadelphia, where he helped his widower father run a successful clothing business. Growing wealthy at a young age, he turned his attention to studying the Bible, becoming particularly interested in adventism and millenarianism — theories that claim the end of the world and Christ’s second coming are imminent, and their exact time can be accurately predicted by man. In his 20s, Russell started contributing articles to Christian journals and newspapers, and in 1879 he started his own magazine, Watchtower, which he used for the next three decades to share his theories of the apocalypse, and intructions for how good Christians could survive it.

Russell argued that seemingly vague or unclear parts of the Bible actually had very specific meanings that could be decoded through historic and scientific research. Building on the work of other adventist and millennialist scholars, he concluded that Jesus Christ — who he believed to be a being distinct from God — had already returned to earth invisibly, but would not trigger Armageddon and the creation of a new, divine world until 1914. Those who accepted Christ would live for a thousand years (“the millennium”) in His new kingdom before the final judgment. In the meantime, it was the duty of all “witnesses” to this plan of God (who Russell believed held the name “Jehovah“) to proselytize, and gather the “144,000 saints” mentioned in the Book of Revelation to help rule alongside Christ during the millennium.

Russell’s charisma and confidence made him one of the most popular Christian preachers of the late 1800s and early 20th century, and he traveled the world building a following of so-called “Bible Students” who read his magazine and embraced his theories. Though he detested organized religion, in 1884 Russell founded the Watchtower Society, with himself as president, and it gradually assumed the characteristics of a church. While Russell’s prediction of a 1914 apocalypse obviously didn’t come true, his claim that the outbreak of World War I (1914-1918) was evidence a phase of chaos had consumed the world in the run-up to its end helped preserve his credibility. He passed away in 1916 having established the basic beliefs and organizational structure of the Christian sect now known as Jehovah’s Witnesses, which today claims over eight million followers across the globe.

Charles Taze Russell was a severe, but kind and compelling man whose patient and persuasive personality helped make him an effective minister. Despite his wealth, he lived relatively modestly and was extremely puritanical, abstaining from basically any activity that could be considered sinful, including drinking alcohol, eating meat, and most forms of entertainment. While Russell never called himself a prophet, he did believe much of his Biblical scholarship was divinely-guided, and his organization spoke of him as God’s earthly “servant” — which gave him something of an inflated ego. He could be vicious to those who challenged his authority even when he was obviously in the wrong, which led to some factionalism in his movement.

The biggest public humiliation of Russell’s life was his troubled marriage to Maria Frances Ackley (1850-1938), an intelligent, independent woman with whom he constantly fought. Initially an active figure in her husband’s movement, Maria grew frustrated with her lack of authority in the Watchtower Society, a byproduct of Russell’s conservative views on women. Things weren’t helped by Russel’s opposition to sex — which he considered immoral even among married couples — or his close friendship with a female Watchtower employee many years his junior. The Russells had a long, messy divorce, and after she became single Maria spent years trying to discredit her ex.

Russell is often alleged to have held a number of bizarre “secret” beliefs, but these are mostly false rumors. He was neither a Freemason nor an occultist, though his obsession with understanding the Bible as literally as possible did lead him to take seriously weird pseudosciences like “pyramidism” that claimed to offer secrets of the ancient world. Politically, Russell was quite left-wing, viewing capitalism and big business as leading evils of the corrupted world of man. In 1913, he was implicated in an embarrassing scandal when it was revealed his Watchtower Society had briefly sold seeds for fake “miracle wheat” in order to fundraise.