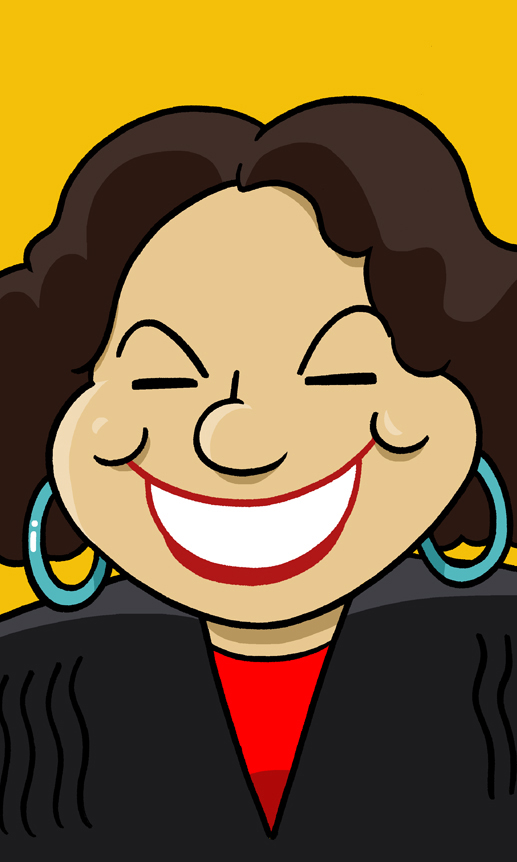 When not on the bench, Justice Sotomayor generally wears bright, solid-colored suits or blouses, and is fond of large earrings. Unlike some of the other female Supreme Court judges, she has chosen not to wear a frilly lace collar with her judicial robes.

Why is Sonia Sotomayor famous?

Sonia Sotomayor is the first Latino-American judge on the Supreme Court of the United States, making her the highest ranking person of Hispanic heritage to ever serve in the United States government.

When did Sonia Sotmayor live?

Sonia Maria Sotomayor was born in The Bronx, New York on June 25, 1954. She lives in Washington, D.C.

What did Sonia Sotomayor do?

Born to poor immigrants from Puerto Rico, young Sonia grew up in a mostly dysfunctional Spanish-speaking household in the projects of inner-city New York. A diligent student who was fascinated by the law from a young age, financial assistance and affirmative action programs helped her enroll in Princeton University and later Harvard Law School, where she earned a doctorate of law in 1979. Returning to New York, she worked several years for the famed Democrat district attorney Robert Morgenthau (1919-2019) before joining the firm of Pavia & Harcourt as a partner specializing in international corporate law.

In 1992, the administration of President George H. W. Bush (1924-2018) made Sotomayor a federal trial judge for the New York’s Southern District, and six years later she was promoted by President Bill Clinton (b. 1946) to serve as one of 13 judges on the New York-based U.S. Second Circuit Court of Appeals. In 2009, following the retirement of Supreme Court Justice David Souter (b. 1939), a third president, Barack Obama (b. 1961) appointed her as Souter’s replacement, making Sotomayor the first Latino-American to ever serve on the United States Supreme Court — and only the third woman.

Appointed by a Democratic president to replace one of the Supreme Court’s most reliably liberal judges, Sotomayor has proven a predictably progressive vote on the nine-member court, and has voiced generally left-of-center opinions on controversial matters like the death penalty, LGBT rights, and separation of church and state. Though she remains a foe of conservatives (only nine of 40 Senate Republicans voted to approve her appointment), her status as a groundbreaking figure for the Hispanic community and a forceful advocate for progressive legal philosophy guarantees she is likely to remain an iconic figure of American history for decades to come.

Justice Sotomayor is a mostly calm and serious woman with a dignified, formal demeanor that is not unusual for a judge. Less typical, however, is her habit of speaking openly and frankly about her personal life, authoring an acclaimed memoir (My Beloved World, 2013) and granting interviews to celebrities like Oprah Winfrey (b. 1954) and Stephen Colbert (b. 1964) as well as talk shows like The View. A child of poverty, Sotomayor escaped her humble beginnings largely thanks to an enormous reserve of self-discipline and strong work habits, and is often celebrated as an inspiring role model of what can be achieved from a life devoted to learning and education. Diligence comes at a price, however, and she has also blamed her obsession with work for helping cause the 1983 breakup of her marriage. To this day, she claims to be too busy for a relationship.

Politically, Sotomayor has always been a firm liberal with a particularly strong devotion to the cause of affirmative action for disadvantaged minorities, something she believes provided great assistance in her own life. More controversially, she’s also been a proponent of the idea that judges should use personal life experiences to help inform their decision-making, and prior to her Supreme Court appointment she had a history of referring to herself as a “wise Latina” in speeches — a turn of phrase many critics found boastful or offensive. Forceful and blunt in her style of judicial questioning, she has sometimes been characterized as a bit of a “bully” to lawyers she disagrees with, though others have described this reputation as sexist and unfair.

Stricken with Type 1 Diabetes since childhood, Sotomayor takes daily insulin injections and has cited fear of early death as the reason she and her ex-husband never had children. She is a great fan of baseball, and over the years has thrown a couple ceremonial first pitches on behalf of her beloved New York Yankees. On two separate occasions she has made a cameo appearance on Sesame Street.

Biskupic, Joan. Breaking In: The Rise of Sonia Sotomayor and the Politics of Justice. New York: Sarah Crichton Books, 2014.