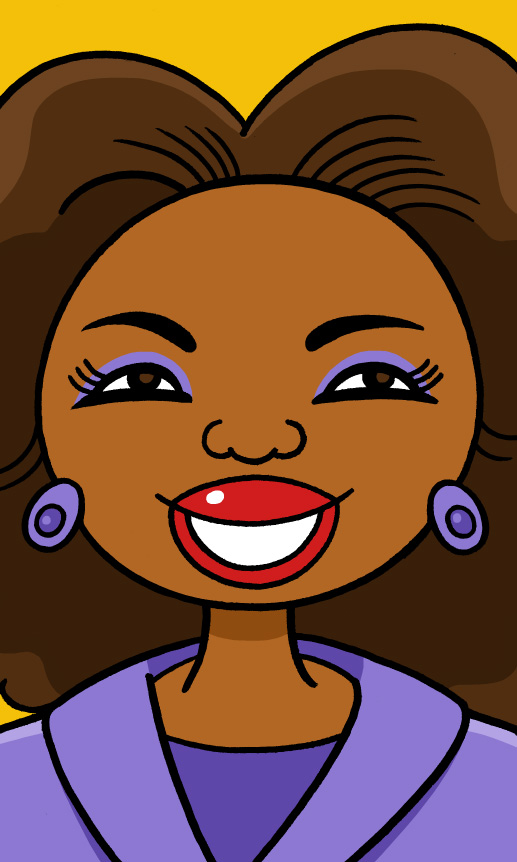 Oprah enjoys fashion and glamor, and is known for her elaborate makeup, hair, and outfits. Her weight fluctuations have been the subject of endless gossip — she’s currently around 160 pounds, but has been as heavy as 237 in the past.

Why is Oprah Winfrey famous?

Oprah Winfrey is one of the best-known television celebrities in America, and serves as head of a vast media empire seeking to spread positive, inspirational messages to women around the world.

When did Oprah Winfrey live?

Orpah Gail Winfrey was born on January 29, 1954 in Kosciusko, Mississippi. Despite her legal name, she’s always gone by “Oprah,” because she claims people didn’t know how to pronounce “Orpah” properly. She lives in Montecito, California.

What does Oprah Winfrey do?

Overcoming a poor and abusive childhood, Oprah worked her way through college and began a television career at age 20. After a brief stint as a Chicago anchorwoman, in 1986 she began The Oprah Winfrey Show, a nationally-syndicated program destined to become one of the most successful in television history.

Initially a standard daytime chat show exposing dysfunctional families, cheating husbands, and bizarre subcultures, over its 25 year run, Oprah steadily pushed her program in a more wholesome direction, with a greater focus on stories involving health, spirituality, and individual empowerment. Recurring guests such as Dr. Phil McGraw (b. 1950), Dr. Mehmet Oz (b. 1960), and Eckhart Tolle (b. 1948) educated viewers on  relationships, nutrition, and inner peace, while celebrities opened up about overcoming trauma and shared strategies for success. Appealing mostly to middle-class American women, The Oprah Winfrey Show produced over 4,500 episodes before concluding on May 25, 2011, and was watched religiously by millions of viewers seeking a daily dose of self-help.

Too big to be contained by a single show, Oprah’s message of self-improvement has since spun off into a number of other media outlets including a magazine (“O“), a satellite radio station (Oprah Radio), a television channel (The Oprah Winfrey Network), a popular website (Oprah.com), and, in 2012, a new, primetime show (Oprah’s Next Chapter) — all of which feature Winfrey as owner, manager, and star. As one of the richest women on earth, Oprah has also risen to become one of America’s most generous philanthropists, and has been a generous benefactor of numerous charities devoted to helping the lives of disadvantaged black youth in America and South Africa.

It’s often said that Oprah is now as much a “brand” as a woman, and with millions of devoted, obedient fans, her endorsements and opinions remain among the most influential in the world.

Oprah Winfrey’s enormous success on television is largely credited to her warm, caring personality and consistently upbeat, cheerful attitude, both of which have helped her stand out in the often crass and exploitative world of American talk shows. On screen, Oprah is famously charismatic and empathetic; a woman best-known for being uplifting and inspirational to viewers and tender and sympathetic to guests. Widely respected for her kindness as well as her business savvy, Winfrey consistently tops polls of the world’s “most admired” women.

Despite her show’s heavy emphasis on the therapeutic power of sharing, however, the off-screen Oprah is fairly guarded and protective, rarely giving interviews and demanding strict confidentiality agreements from her staff as a way to limit gossip. This secrecy, in turn, has helped make Oprah something of a tabloid darling, and over the years Winfrey’s closely-guarded personal life has been the subject of endless media chatter, particularly her fluctuating weight, troubled family life, and guarded relationships with longtime partner Stedman Graham (b. 1951) and best friend Gayle King (b. 1954).

In business, Oprah is usually described as a generous but demanding boss, with high standards and an obsessive desire for control that make her staff loyal, but frequently overworked and exasperated. Her enormous wealth has led to a luxurious lifestyle, including several multi-million dollar homes, acres of private beach in Hawaii, and a custom-built jet, and she’s said to be something of a “diva” when it comes to expectations of first-class treatment. She is universally acknowledged to be a woman of enormous ambition and self-confidence — sometimes bordering on narcissism — and fiercely spiritual, but not particularly religious.