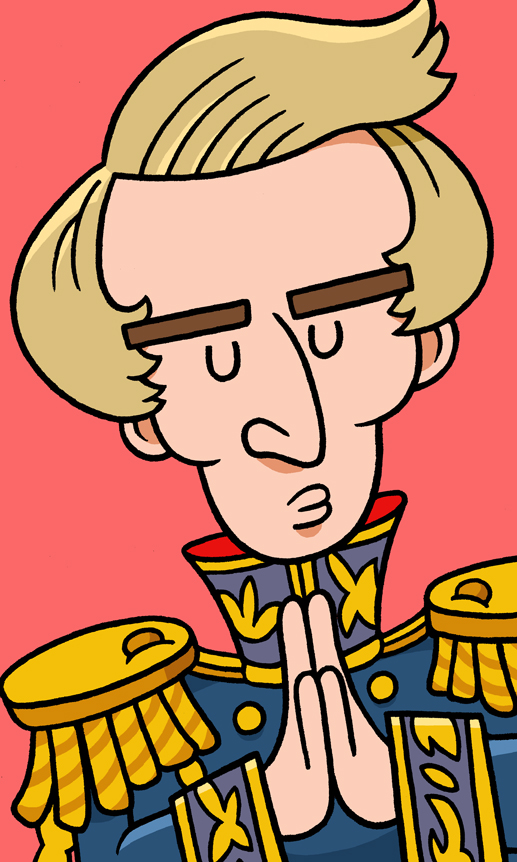 No one knows exactly what Joseph Smith looked like. He was never photographed and only posed for two paintings, both of which are said to be poor likenesses. He was supposedly an average-looking man with light hair and eyes. Near the end of his life he usually appeared in public in an elaborate “Lieutenant General’s” uniform he designed for himself.

Who was Joseph Smith?

Joseph Smith was the founder of the Mormon religion and served as first president of the Church of Jesus Christ of Latter-day Saints.

When did Joseph Smith live?

Why is Joseph Smith famous?

Joseph Smith was raised by poor farmers in rural New York, and as a young man was spiritually open-minded, dabbling in different denominations of Christianity and magic-based treasure hunting. He claimed to begin receiving messages from God as a teenager, and at age 16 was said to be visited by an angel who directed him to buried golden plates containing a third book of the Bible. With more divine help, Joseph translated the plates into English, publishing their contents as The Book of Mormon: Another Testament of Jesus Christ in 1830. Later that year, he founded the Church of Jesus Christ of Latter-Day Saints with himself as president.

The Book of Mormon holds that ancient Israelites sailed to America in the 4th century where they were visited by the resurrected Christ. Through the accounts of Christ’s American witnesses, Mormon and Moroni, the book reaffirms basic Christian theology of salvation with greater clarity. As the years progressed, however, Joseph continued to have divine revelations (today archived in the collections Doctrine and Covenants and Pearl of Great Price) promoting theology that significantly deviated from mainstream Christianity, including the practice of sealing families so they could remain together in heaven, posthumous baptisms to save the souls of those who had died ignorant of the Church, the concept of exaltation, which holds that devout humans can become gods in the afterlife, and the organization of a elaborately hierarchical church headed by a single prophet capable of speaking directly with God.

Seeking to build a “New Jerusalem” in America, Joseph and his followers (known as Mormons, or Saints) unsuccessfully attempted to found a Mormon colony in Ohio and Missouri before establishing a thriving religious community in the city of Nauvoo, Illinois, which Joseph ruled as a virtual dictator. Increasingly unpopular with non-Mormons who considered his teachings blasphemous, politicians who resented Nauvoo’s growing voting power, and a breakaway faction within the Mormon Church, Joseph was arrested in 1844 for ordering the destruction of a dissident Mormon newspaper and was murdered in his jail cell by a mob of anti-Mormons a few days later. His church survived, however, and for revealing the core doctrines of their faith, today Joseph remains venerated as a sacred figure by more than 15 million Mormons worldwide.

Joseph Smith is one of the most controversial figures in American history, and how his life is viewed depends on how seriously one takes the Mormon religion. To followers of his church, Smith is presented as a supremely virtuous, kind, and largely flawless man, who humbly followed God’s instructions and presented others with the path to salvation. On the opposite extreme, critics of Mormonism believe Smith was a megalomaniacal fraud who simply invented a religion to satisfy a personal lust for power. In either case, it is undeniable that Smith took his church very seriously, and was a man charismatic, friendly, and persuasive enough to convince thousands that he was a legitimate prophet of God.

Smith was a polygamist who married dozens of women, often by seducing the wives of other men, and this remains perhaps the most infamous aspect of his entire biography. While he said the practice had been authorized by divine revelation, he nevertheless kept God’s doctrine of “plural marriages” secret to all but his closest followers while simultaneously denouncing the idea in public. Predictably, all this caused tension with his first wife, Emma Hale (1804-1879), who went through phases of denial and acceptance.

In his later years as ruler of Nauvoo, Joseph grew increasingly vain and authoritarian, granting himself many lavish titles and claiming increasingly grand ambitions, including a planned candidacy in the presidential election of 1844. Quick to anger, he had limited tolerance for critics, and growing distaste for his leadership style and personal conduct played a significant role in the events leading to his death. He was fond of wrestling and was a practicing Freemason, though much of the Masonic establishment of Illinois accused him of trying to co-opt their movement.

Beam, Alex. American Crucifixion: The Murder of Joseph Smith and the Fate of the Mormon Church. New York: PublicAffairs, 2014.

Joseph Smith: Prophet of God, The Church of Jesus Christ of Latter-Day Saints.