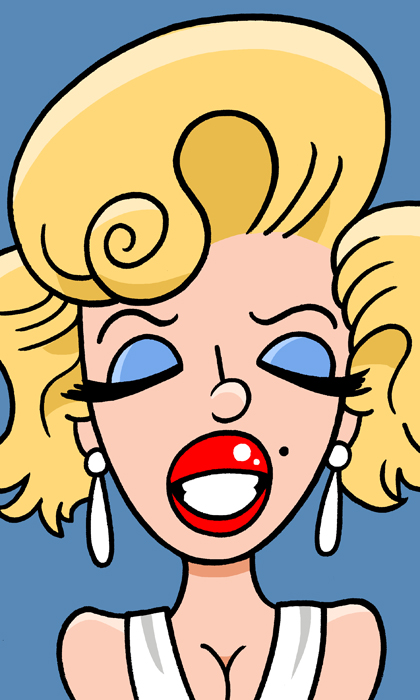 Marilyn Monroe is considered one of the most beautiful women of all time, known for her trademark thick eyelashes, red lipstick, and perfectly coifed hair, which she began dying blond at age 20. She was average height — 5’5 — and had a famously curvaceous, “hourglass” figure, though there is no truth to the popular urban legend that she was in the size 12 to 16 range.

Who was Marilyn Monroe?

Marilyn Monroe is one of the most famous American movie stars of all time, and a world-reknown symbol of 1950s-era Hollywood glamor and sex.

When did Marilyn Monroe live?

Norma Jeane Mortenson was born on June 1, 1926 in Los Angeles, California. This original last name was entirely speculative as her mother did not know who her birth father was. She was later baptized with her mother’s last name, and became Norma Jeane Baker. In 1946, she started going by the stage name Marilyn Monroe and legally changed it in 1956. During her marriages she sometimes used her various husbands’ last names. She died of an overdose of barbiturates (sleeping pills) on August 5, 1962 at age 36 in Los Angeles.

Why is Marilyn Monroe famous?

Norma Jean Baker was born to a poor single mother who was crippled by mental illness. Young Norma never completed high school and spent her childhood in a series of abusive Los Angeles orphanages and foster homes. While working in a munitions factory during World War II (1939-1945), Marilyn was photographed for an army newspaper and the ensuing publicity inspired her to work for several years as a model, which in turn inspired an acting career.

Formally untrained but gifted with natural charisma, during the 1950s Marilyn slowly rose through the ranks as a contract actor for 20th Century Fox under Hollywood’s “studio system,” playing a series of bit parts before achieving her breakout role as a gold-digging lounge singer in the 1953 musical comedy, Gentlemen Prefer Blondes. Audiences were enamored by her beauty, comedic skill, and musical talent, and she spent the rest of the decade starring in other well-received musical comedies like The Seven Year Itch (1955) and Some Like it Hot (1959) — the latter performance earning her a Golden Globe. Designed to highlight her sexiness and musical skill, the characters she played were all broadly similar — usually showgirls or cabaret singers with somewhat ditzy or manic personalities.

The 1960s proved more difficult, however, and following the flop of her 1961 film The Misfits, and the problem-plagued shooting of the never-completed Something’s Got to Give, Marilyn sank into worsening depression over the state of her career, and died, possibly of suicide, of a drug overdose in 1962. Her life cut tragically short, Marilyn’s glamorous reputation only increased, and today she remains perhaps the most iconic American actress of all time.

Marilyn Monroe was a charming, witty woman who could be every bit as flirtatious and funny as the characters she played. Her outer beauty masked deep inner pain, however, and Marilyn was chronically plagued by depression, insecurity, and mood swings in response to an unpredictable life she never felt she could fully control. She self-medicated her anxieties with drugs and alcohol, but also obsessive psychotherapy — near the end of her life she was attending counseling as often as twice a day, seven days a week.

Marilyn’s self-centeredness made her maddeningly difficult to work with, and her various neuroses — including oddly enough, stage fright — ensured she was constantly late for shootings. Though she disliked Hollywood culture she genuinely enjoyed acting, but grew to hate the “dumb blonde” roles she was constantly given, craving more serious parts. Self-conscious about her ditzy reputation and embarrassed about her lack of formal education, Marilyn was a voracious reader who loved to study history, poetry, philosophy, and literature, and died with a personal library of over 400 books. Despite her glamorous image, she lived in a modest apartment, wore mostly fake jewelry, and left few possessions upon death.

Marilyn was briefly married three times, most famously to the baseball player Joe DiMaggio (1914-1999) with whom she would maintain a lifelong paternalistic relationship, and the playwright Arthur Miller (1915-2005) with whom she shared a deep intellectual bond. As America’s leading sex symbol, she was best known for her unapologetic promiscuity, however, and had multiple affairs with many of America’s most famous men, including several flings with President John F. Kennedy (1917-1963) and a much deeper affair with his brother, attorney general Robert Kennedy (1925-1968). Despite being rather homophobic, she did occasionally have sex with women as well. She became pregnant on several occasions but always had miscarriages or abortions.