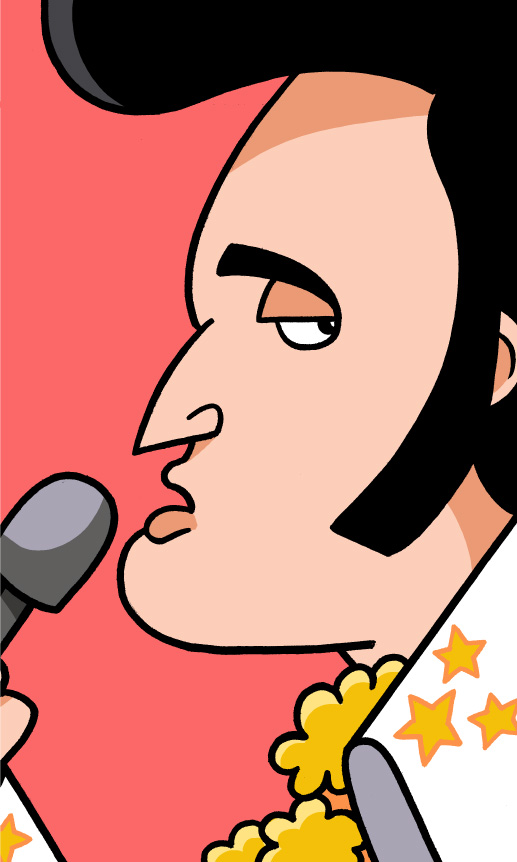 Elvis had a thick head of wavy black hair and heavy sideburns, which became his most iconic trademark. Though he initially dressed mostly in stylish suits, during the latter phase of his musical career he would often perform in garish, sequined jumpsuits and capes.

Why is Elvis Presley famous?

Elvis Presley was one of the most popular American rock musicians of the mid-20th century, releasing dozens of hit songs, records, and musicals that captivated generations of fanatically devoted fans.

When did Elvis Presley live?

Elvis Aron Presley was born in Tupelo, Mississippi, on January 8, 1935, alongside a stillborn twin brother. His middle name only had one “a” though it’s often misspelled, even on his tombstone. He died at age 42 on August 16, 1977 in Graceland, Tennessee. The exact cause is still unknown.

What did Elvis Presley do?

Musical from a very young age, Elvis grew up in rural Tennessee where he was heavily inspired by the folk, country, and gospel music that defined the American south — from artists both black and white. At the age of 19, he was noticed by a local radio producer and recorded his first hit single, That’s All Right, Mama (1954), and quickly rose to overnight stardom. For the remainder of the 1950s, Elvis’ energetic rock songs, distinctive, drawling voice, and charismatic style generated hit record after hit record, and he toured the country performing songs such as Heartbreak Hotel (1956), Hound Dog (1956), and Jailhouse Rock (1957) for enormous stadiums of screaming fans. Beginning in 1956, Elvis also became one of America’s most popular actors, though the more than 30 films he starred in, such as  King Creole (1958) and Blue Hawaii (1961), were mostly forgettable, corny dramas used to make a quick profit from his fame.

The 1970s are often considered a distinct “second phase” of Elvis’ career, and marked a move away from films and back towards live performances, most famously in the nightclubs of Las Vegas and Hawaii. No longer as energetic or athletic, his music became slower and more soulful, with a more adult appeal, with ballads such as The Wonder of You (1970) and Promised Land (1973).

By the time of his tragic death at the age of 42, Presley had produced more than 18 number one singles on the Billboard Top 100 and racked up dozens of gold, platinum, and diamond record awards. A larger than life personality with an iconic look and style, his legacy has been kept alive for decades thanks to a thriving subculture of tribute artists and impersonators.

Elvis led a mostly tortured and tragic life, and as one of the most famous celebrities in history, his personality and character have been the subject of endless gossip and analysis. As is often the case with stars who died prematurely, his final years remain particularly scandalous, perhaps best summed up by the title of an infamous 1977 tell-all, Elvis: What Happened?

In his musical performances, Elvis was best known for his extreme sensuality and flirtatiousness, which, although popular with women, made him an extremely controversial figure in the conservative 1950s. Offstage, however, he was generally shy, polite, and soft-spoken, with a somewhat awkward, gentle personality. Among those who knew him best, Elvis is usually described as caring and generous and but also immature and emotional, with a sometimes explosive temper.

Elvis’ fame allowed him to live an extremely lavish, almost carnival-like lifestyle in his opulent Tennessee mansion known simply as “Graceland“ alongside his young wife Priscilla (b. 1945), their daughter Lisa Marie (b. 1968) and a clique of boyhood friends dubbed the “Memphis Mafia. Never shy about spending money, he had particularly expensive taste in cars, clothes, and jewelry. Despite all these material pleasures, however, most of Elvis’ personal relationships were tense and dysfunctional; he divorced in 1973, and as fame made him more erratic, spoiled, and difficult, friends began to turn away. By his late 30s, Elvis felt increasingly trapped in a static, go-nowhere career controlled by his demanding manager, Colonel Tom Parker (1909-1997), and grew frustrated by his lack of creative freedom. His final years were marked by bouts of depression, binge-eating, and a dangerous addiction to prescription drugs that many blame for his death.