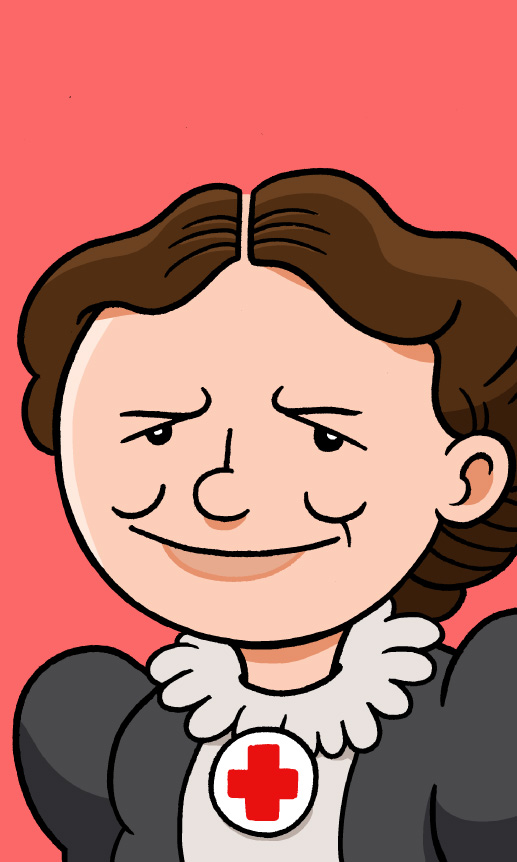 Despite her considerable strength and energy, Clara Barton was a small woman, only around five feet tall. She dressed mostly in the drab, conservative fashion of her time, but was known to enjoy accessorizing her outfits with red ribbons and Red Cross-themed decorations.

Why is Clara Barton famous?

Clara Barton was a heroic Civil War nurse, the founder of the American Red Cross, and one of America’s greatest wartime humanitarians.

When did Clara Barton live?

Clarissa Harlowe Barton was born on December 25, 1821 in North Oxford, Massachusetts. She died of double pneumonia at age 90, on April 12, 1912 in Glen Echo, Maryland.

What did Clara Barton do?

Born into a large, loving family, Barton spent 15 years working as a elementary school teacher before migrating to Washington D.C. to work for the federal government. Upon the breakout of the Civil War (1861-1865), Barton began volunteering to help wounded soldiers returning to the nation’s capital before concluding her efforts would be more productive on the battlefield. Accompanied by a small band of helpers, for the rest of the war Barton would travel to many of the conflict’s bloodiest fronts, where she personally dressed the wounds, feed, cleaned, and comforted thousands of young men. Though her sympathies lay with the United States, she served both Union and Confederate soldier alike, saying she saw “need, not uniform.”

After the Civil War ended, Barton traveled to Europe to rest, but was quickly drawn back into service upon the breakout of the Franco-Prussian War (1870-1871). While there, she observed the sophisticated humanitarian work of Europe’s newly-formed Red Cross society, and upon returning to America founded the American Red Cross on May 21, 1881, with herself as president. Barton then successfully lobbied an isolationist Congress into passing the Geneva Conventions (1882), which forced the United States to abide by certain standards of human rights during wartime, and made her organization the sole authorized provider of neutral medical assistance on the battlefield.

Expanding the Red Cross’ mandate to include natural tragedies as well as war, Barton spent her later years traveling around America and the world, volunteering her services at some of the late 19th century’s worst disasters, including the Florida yellow fever epidemic (1887), the Jonestown, Pennsylvania flood (1889), the Armenian massacre (1891), the South African Boer War (1899-1902) and Cuba’s War of Independence (1898). Refusing to retire until age 82, Barton’s lifetime of service continues to inspire the millions of Americans who work and volunteer for the American Red Cross to this day.

Clara Barton was a tough and determined woman with a calm, kind, and caring personality that made her naturally well-equipped for humanitarian work. Demanding and stubborn but never abrasive, she was known for getting her way mostly through sheer persistence, and a refusal to get riled in the face of adversity. Despite this, she did struggle with lifelong bouts of anxiety and depression, and the deeply traumatizing nature of her work has led many modern observers to conclude she probably suffered from the condition now known as Post-Traumatic Stress Disorder. Loneliness, born from her constant travel, was also a factor, and made it difficult for her to maintain close friendships. Barton repeatedly refused to marry, finding most men underwhelming and marriage an oppressive burden.

As she became more powerful and famous, critics increasingly accused Barton of being arrogant and egotistical, and her decision to remain an active battlefield nurse while simultaneously president of the Red Cross was particularly controversial. In 1904, she was effectively forced into retirement after critics, including President Theodore Roosevelt (1858-1919), charged she was more interested in self-promotion than being an effective manager. While undeniably selfless, Barton was somewhat vain in regards to her personal appearance, and for many years dyed her hair and lied about her age in order to seem younger than she really was.

Politically, Barton was a strong progressive who believed (particularly as she aged) in liberal causes such as equality for African-Americans and voting rights for women, yet despite her charisma as a powerful public speaker, she generally shied away from using her talents for political activism. Religiously, she was an open-minded Universalist, and she was known to dabble in occult spiritualism, particularly séances with the dead.

The Barton Center for Diabetes Education.