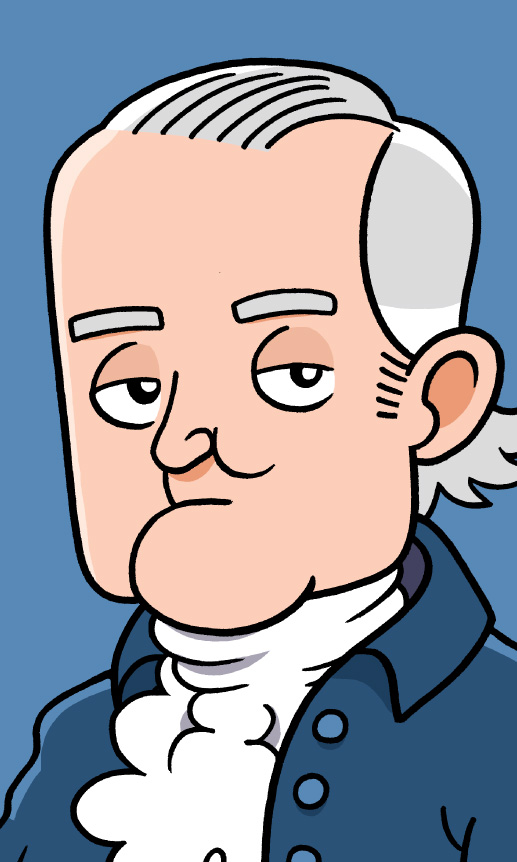 A man of status and standing, Noah Webster dressed like a respectable gentleman of his time, with dark suits, billowy white cravats, and long, but well-groomed hair.

Why is Noah Webster famous?

Noah Webster is considered the father of “American English” and was the author of the first comprehensive American dictionary.

When did Noah Webster live?

What did Noah Webster do?

Webster was a brilliant child, and despite his modest upbringing was able to enroll in Yale University at only 16. After graduating, he bounced between short-term jobs in journalism, law, freelance writing, and politics, before settling on a career as an elementary school English teacher. It was during this time he authored his first textbook, The American Spelling Book (1783).

Intended for children, Webster’s so-called “Blue Back Speller” offered clear instructions and exercises to help students understand the fundamentals of English, including pronunciation, comprehension, and spelling, mostly by reading a series of progressively more difficult essays about ethics and morality. An instant best-seller, the “Blue Back Speller” quickly became the single most popular book of the 19th century, and afforded the author an early retirement.

Webster then plunged into his most ambitious work — the world’s first comprehensive dictionary of “American” English. A firm proponent of a literate, democratic society, Webster believed the English of an independent American should be governed by rules that were clearer, simpler, and more intuitive than those of British English, and reflect the way average Americans actually spoke and spelled, rather than as academics and intellectuals believed they should. His series of dictionaries released between 1806 and 1841, beginning with the short Compendious Dictionary of the English Language (1806) and concluding with the massive 70,000 word, two-volume An American Dictionary of the English Language (1828, revised in 1841) officially normalized many of the distinct English conventions Americans take for granted today, such as not using silent “u’s” in words like “color” and “honor,” using a “se” rather than a “ce” in words like “defense,” ending words like “plow” with a “w” rather than a “ugh” and numerous other simplifications.

Though not all of Webster’s English reforms caught on (spelling “women” as “wimmen,” for instance) and some resented his “dumbing down” of the language, Webster’s linguistic changes were some of the most lasting of the modern era, with many (such as changing “gaol” to “jail”) now mainstream even in Britain itself. One hundred and seventy years after his death, his legacy continues to live on in the form of the Merriam-Webster English dictionaries, which remain among the world’s most cited and respected.

Noah Webster was a popular, famous man widely celebrated as one of the most important personalities of post-revolutionary America — especially by Webster himself. Boastful and proud, he fully understood the role his work would play in shaping the future of American culture, and was not shy about singing his own praises or denouncing the inferiority of others. Though many admired his work, his snobbishness and arrogance made him a difficult man to get along with, and even his own family found him exasperating.

Webster’s philosophy was defined primarily by the fierce patriotism he had developed during the American Revolution, and a mid-life religious conversion to a particularly puritanical form of Christianity. Politically, he was surprisingly liberal, and a strong critic of slavery, a proponent of female equality, and an early advocate for universal childhood education, though his opinions on other issues were often purposely eccentric or inflammatory. A fervent believer in the importance of good citizenship and civic participation, Webster spent much of his free time volunteering in a vast variety of clubs and organizations, and served brief stints as a part-time judge, city councilman, and state legislator (in two different states) at various times in his life.

Perhaps predictably for a dictionary writer, Webster had an excellent memory and a mind for facts that sometimes bordered on the obsessive. He loved counting, memorizing, and making lists and charts of even the most mundane details of his life, leading some to believe he may have suffered from what modern psychologists would call obsessive compulsive disorder.

“Noah Webster and America’s First Dictionary.” About Us, Merriam Webster.