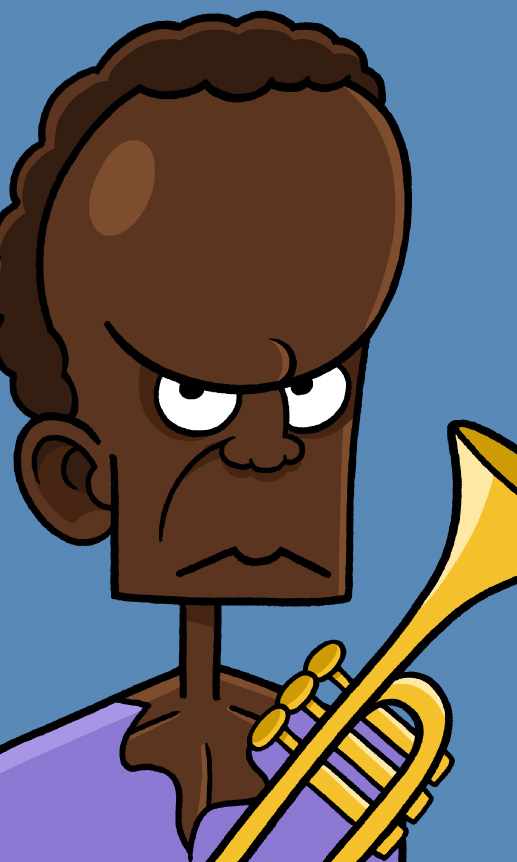 Miles Davis had an athletic build that he was fond of showing off, and often posed shirtless in photos. When dressed, he enjoyed wearing wild, colorful, eccentric fashions, which steadily became more extreme as he aged.

Why is Miles Davis famous?

Miles Davis was one of the most influential and famous jazz musicians of the 20th century.

When did Miles Davis live?

Miles Dewey Davis III was born on May 26, 1926 in Alton, Illinois. He died of a stroke at age 65 on September 28, 1991 in Santa Monica, California. Davis was knighted by the Knights of Malta in 1988, and from then on he sometimes used the title “Sir” before his name, including on his tombstone.

What did Miles Davis do?

Born into an upper-middle class black family, Davis’ interest in trumpet-playing was supported by his parents from a young age, and at 18 he enrolled in New York’s prestigious Juilliard School of Music. Once in the city, he quickly befriended famed bebop saxophonist Charlie Parker (1920-1955), and in 1945 abandoned school to pursue a full-time career in Parker’s band. Under his tutelage, Davis quickly emerged as a talented band leader in his own right, and in the late 1950s released several albums — most notably Birth of the Cool (1957) — that put him on the map as one of America’s emerging jazz greats. As the years progressed, he would team up with numerous other stars of the genre, including John Coltrane (1926-1967), Bill Evans (1929-1980) and Herbie Hancock (b. 1940), to produce some of the most compelling and creative American music of all time.

Davis’ musical style evolved constantly throughout his career, and most fans divide his work into several distinct phases. Initially, he was considered one of the leading figures of the American bebop tradition, or fast-paced, improvisational jazz. In the 1950s, Davis turned to the slower, more structured style of modal jazz, with his 1959 album, Kind of Blue, considered a masterpiece of the genre. It was during the 1970s, however, that Davis began pursuing his most revolutionary and radical style yet, so-called jazz fusion in which traditional jazz rhythms were combined with electric guitars, reverbs, synthesizers, and other elements of rock n’ roll, a fresh sound which culminated in another iconic album, Bitches Brew (1970).

In his later years, Davis mostly continued his jazz fusion work, but also began experimenting with jazz covers of pop and Broadway songs. He died in 1991, shortly after receiving a special Lifetime Achievement Grammy honoring his long and revolutionary career.

Miles Davis is often considered one of the key figures in establishing the modern idea of “cool,” in the sense of combining immense talent, style, and charisma with a somewhat aloof, indifferent personality. He also demonstrated, however, that being cool was quite distinct from being pleasant or likable, and even his greatest admirers are usually quick to concede that Davis was an arrogant, self-centered, difficult man whose numerous flaws and vices often threatened to overshadow — or even ruin — his musical career.

Cold, critical, and often cruel to the people around him, Davis had little talent for maintaining respectful relationships. As a band leader, he was bossy and jealous, and though admired, was not particularly well-liked by those who worked with him. To assistants and staff he was a demanding diva who expected constant first-class treatment, and even to fans he could be rude and disrespectful, with a particularly infamous habit of performing onstage with his back to the audience. His relationships with women were little better, and by his own admission, all three of his wives suffered violent abuse at his hands. Extremely racially sensitive, he saw racism everywhere, yet was quite openly bigoted towards whites.

Like many musical superstars, Davis’ fame and riches were accompanied by a wild and decadent lifestyle, full of parties, booze, sex, and fawning groupies. A notorious drug addict, his musical career was twice stalled due to long bouts of substance abuse, with the years between 1949 and 1954 and then 1975 to 1980 being almost entirely unproductive, due to crippling use of heroin and cocaine. Outside of music, Davis’ greatest interests were boxing and painting. He was a half-decent fighter — though not always in the ring — and some of his abstract works have been complimented by critics.