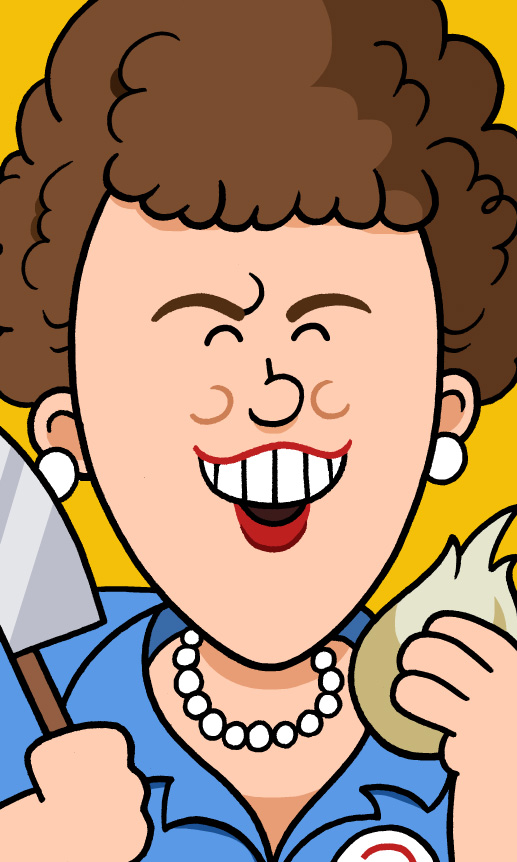 Julia Child was a large woman, over 6’2 with a broad-shouldered build. Though she became more interested in fashion as she aged, her trademark outfit was a simple blue blouse and a string of pearls.

Why is Julia Child famous?

Julia Child is considered one of the founders of modern American cuisine, and helped transform the cooking habits of millions through her enormously popular television shows and cookbooks.

When did Julia Child live?

Julia Carolyn McWilliams was born on August 15, 1912 in Pasadena, California. She took her husband’s last name, Child, upon her marriage in 1946. She died of Kidney failure on August 13, 2004, in Montecito, California, two days before her 92nd birthday.

What did Julia Child do?

Born in California to a wealthy family of patrician New Englanders, young Julia’s early life was privileged and sheltered, with plenty of fun and adventure but few pressures or obligations. She was well into her 30s before settling on her first real job — a U.S. intelligence officer during World War II (1939-1945). Marrying a fellow spy, the Childs relocated to France after the war, where Julia was exposed to European cuisine for the first time. Ending years of drifting, she had finally found her calling.

Enrolling in Paris’s prestigious Le Cordon Bleu cooking school, Child became a passionate and dedicated student of the art of French cuisine, and with fellow students Simone Beck (1904-1991) and Louisette Bertholle (1905-1999) eventually decided to produce a cookbook that would share France’s finest recipes with American audiences. In 1961, after nearly nine years of intensive study and research, the trio released the 700-page Mastering the Art of French Cooking, a clear how-to manual for creating delicious meals with fresh meats, vegetables, spices, and sauces — ingredients that had become uncommon in America’s post-war era of artificial flavors, processed snacks and fast food.

During a book tour in the U.S.A., Child made a highly successful television appearance and was promptly offered her own cooking show — The French Chef. It was an instant hit, and Julia Child would remain a presence on television for much of the next 40 years, teaching generations of audiences how to make hundreds of meals simply by following her clear, honest, friendly, and often humorous instructions. Continuing to share her wisdom well into her final years, by the time of her death Child had starred in countless TV shows and specials, authored dozens of cookbooks, and forever changed the taste of American food.

Julia Child was an enormously charming, charismatic, and funny woman, whose happy, carefree, self-depreciating personality was one of the main reasons for her success as a television star. Defying the traditional stereotype of professional chefs — particularly French chefs — as stern and humorless, Child was laid-back, silly, and easygoing, with a sing-song voice that addressed the viewer like an old friend. While there was no truth the rumor that she was often drunk on set, her unpolished performances and habit of making clumsy mistakes made her a rich target for impersonation and satire.

Julia’s off-air personality was little different, and her warm, bubbly attitude made it easy for her to make friends and get along with strangers. Child was extremely close to her husband of 47 years, Paul Cushing Child (1902-1994), an artistic, worldly bohemian who had taken it upon himself to help his upper-crust wife out of her shell. The two had a progressive, egalitarian marriage, and just as Julia had obediently followed Paul around the world during his spy days, he abandoned his own career and became his wife’s full-time assistant following her TV stardom. Both were fond of traveling, particularly to France, where Julia maintained close ties for the rest of her life.

In open spite of her conservative upbringing, Julia Child was very liberal politically. She was particularly outspoken in her defense of abortion rights, and was a high-profile supporter of Planned Parenthood, often staging special fundraising events for the pro-choice group. She was, however, sharply critical of vegetarianism and felt much of modern “diet culture” was ridiculous and depressing.