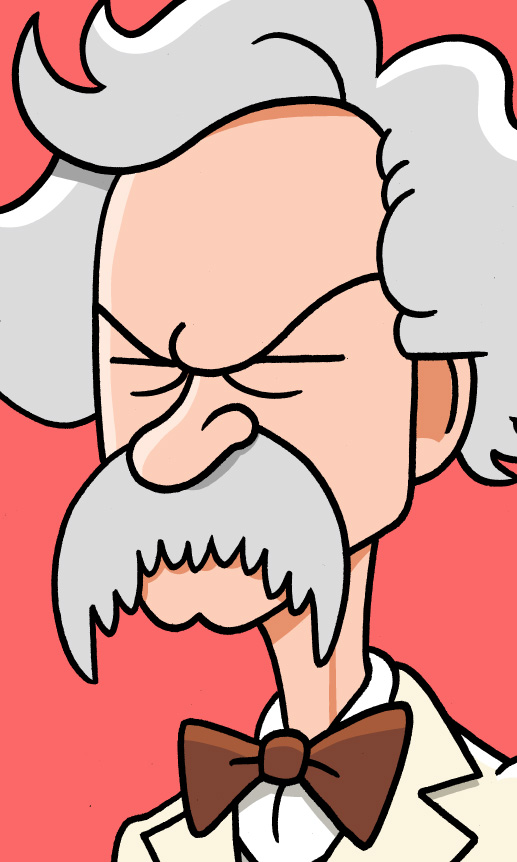 Mark Twain was known for his white suits, bow-ties, wild hair, and bushy mustache. An active smoker, he was rarely seen without a cigar in hand.

Why is Mark Twain famous?

Mark Twain is considered one of the greatest authors in American history, and wrote a number of popular novels, essays, and editorials offering humorous, whimsical, and often cynical commentary on late-19th century American life.

When did Mark Twain live?

Mark Twain’s real name was Samuel Langhorne Clemens, but he began using the pseudonym Mark Twain in 1863. He was born November 30, 1835 in Florida, Missouri, and died of heart disease at age 74 on April 21, 1910 in Redding, Connecticut.

What did Mark Twain do?

Twain grew up in Hannibal, Missouri in the mid-1800s, and was heavily inspired by the wild characters, colorful settings, and social turmoil that defined the age. As a young man, he traveled across the southwest, dabbling in different jobs — including Confederate soldier, silver prospector, and riverboat pilot — before settling on a career as a newspaper columnist, first in Nevada, then California. His snappy writing style and comical take on politics and culture earned him wide acclaim, particularly following a widely syndicated 1865 essay about a rambling bumpkin, The Celebrated Jumping Frog of Calaveras County, and a humorous 1869 collection of incredulous overseas reporting, The Innocents Abroad.

Turning to fiction, Twain would proceed to enjoy even greater success with a string of bestselling novels telling whimsical tales of American life. His two best-known books, The Adventures of Tom Sawyer (1876) and The Adventures of Huckleberry Finn (1884) told stories of two mischievous young boys in the antebellum south, and to this day remain among the best-known and most acclaimed works of American literature.

Twain’s skill as a writer is often credited to his honest, often hilariously unglamorous portrayals of working-class American life, and a playful use of American English. Unlike many other writers of his time, Twain was unapologetic in portraying Americans speaking as they actually spoke, complete with slang, slurs, and bad grammar — all of which gave his iconic characters enormous color and personality.

By the late 19th century, Twain had become the planet’s most famous author and enjoyed a level of fame few Americans prior had ever experienced — indeed, many historians consider him the world’s first true “celebrity.” He continued to write novels and essays prolifically until his death, and repeatedly toured the world, always enjoying praise and acclaim from a planet filled with adoring fans.

Twain was well-suited for his fame and enjoyed the glamour and attention that came with his enormous popularity. As witty and engaging in person as he was on paper, Twain had a charismatic, outgoing personality and was a much-sought public speaker whose clever quips and insightful one-liners are still widely quoted today. His sense of humor was often snarky, sarcastic, and disrespectful, with his most cutting remarks reserved for politicians, whom he loathed.

Insecure and often greedy, Twain lived a lavish lifestyle in an opulent mansion in Hartford, Connecticut, and though wealthy, always spent well beyond his means. His pursuit of ever-greater wealth ended up causing considerable hardship in his later years, and a number of failed business ventures (including an infamously doomed investment in a typesetting machine) forced a painful struggle through bankruptcy in 1891.

Twain was known for his cynicism, but the strong skepticism of others that made him so engaging and funny in print could make him cruel and nasty in personal relationships. Deeply shattered by the death of his wife and favorite daughter in the early 1900s, much of the whimsy and irreverence drained from Twain’s later writing and politics, and he died a bitter man lacking much faith in God, America, or his fellow citizens.