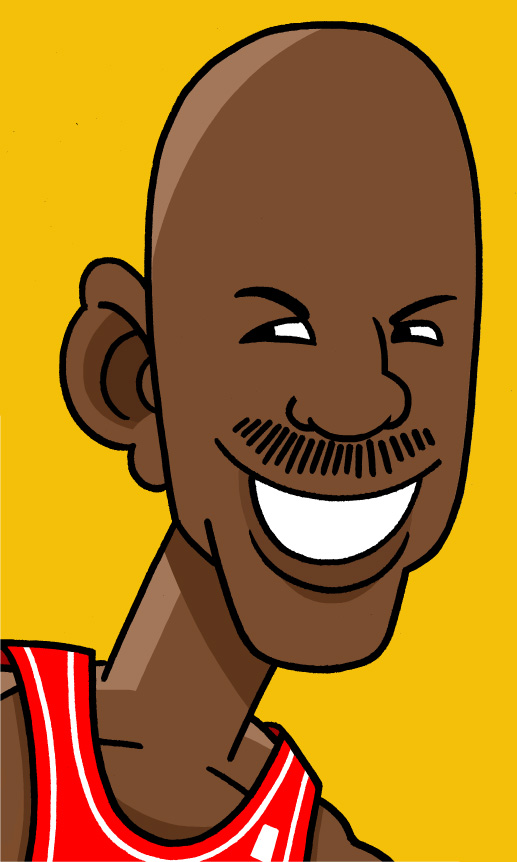 Like most professional basketball players, Michael Jordan is very tall — 6 feet 6 inches — and weighed around 218 pounds during his playing years. He began shaving his head in the early 1990s to hide the fact that he was going bald.

Why is Michael Jordan famous?

Michael Jordan is considered to be among the greatest professional basketball player of all time, and one of the world’s most iconic and beloved sports celebrities.

When was Michael Jordan born?

Michael Jeffrey Jordan was born on February 17, 1963, in Brooklyn, New York, though he grew up in Wilmington, North Carolina. He currently lives in Jupiter, Florida.

What did Michael Jordan do?

Michael Jordan was obsessed with basketball from a young age, and after a prolific career on his high school team, he easily won a sports scholarship at the University of North Carolina at Chapel Hill. He continued to shine on the NCAA college basketball circuit, and in 1984 was drafted by the Chicago Bulls, where he would play for much of the next 14 years.

As a Bull, Jordan’s athletic prowess and fiercely competitive spirit saw him rack up massive scoring records and lead Chicago to a string of victories, while his gravity-defying leaps and slam dunks made him one of the sporting world’s most entertaining stars. Scoring a still-unbeaten record average of 30.1 points per game, between 1990 and 1998 Jordan helped the Bulls secure six victories in six NBA finals, and was awarded five regular season MVP awards for his efforts. A two-time member of the U.S.A. Basketball Men’s National Team, he was equally instrumental in helping America win gold at the 1984 and 1992 summer Olympics. At his peak, Jordan’s immense skill and showy playing style made him perhaps the most famous celebrity on earth, with consistently sold-out games and a seemingly endless array of licensed products commercial endorsements.

Jordan’s long career was interrupted by two brief retirements, once from 1993 to 1995, following his father’s murder (which led to an infamously unsuccessful and short-lived minor league baseball career with the Chicago White Sox), and again from 1999 to 2001, following the departure of longtime Bulls coach Phil Jackson (b. 1945). Jordan’s second comeback, which saw the Chicago star migrate to the Washington Wizards, was not terribly successful, and in 2003 he left the court for good. He’s continued to be a high-profile figure in the NBA in the decades since. In 2006 he purchased control of the troubled Charlotte Hornets and has been active in a variety of charitable and philanthropic causes relating to children and families.

Michael Jordan was a figure of enormous veneration during the peak of his fame, with his many corporate sponsors, particularly Nike, promoting a public image of the basketball star as an almost saintly figure — heroic, humble, and endlessly good-natured. In reality, this charismatic Jordan persona was largely manufactured, and the “real Michael” tends to be described as a considerably more aggressive, irritable, and insecure man than the affable character Americans know from sneaker commercials and his 1996 feature film, Space Jam.

Jordan’s most domineering personality trait is said to be his ultra-competitive spirit and constant hunger for victories — both large and small. While this obviously helps explain his tremendous energy and enthusiasm on the basketball court, it’s also fostered a lifelong affinity for other competitive hobbies, including golf, video games, and gambling. Addicted not only to winning, but also crushing, bullying, and outshining any and all opponents, Jordan tends to view even teammates and friends as sources of competition, a fact which can make him easily jealous and prone to holding grudges — for slights real or imagined. This does not make him a particularly easy person to get along with, and Jordan’s intimate social circle has always been small. He has had a notoriously bad relationship with journalists.

As one of the highest-paid athletes in history — who continues to makes millions annually from advertising deals — Jordan has long enjoyed a lavish lifestyle of costly luxuries, including gigantic mansions, mega-yachts, and fine cigars. Though he was close to his parents, and was particularly traumatized by his father’s murder in 1993, his first marriage was always tense, and culminated in one of the most expensive divorces of all time.

Halberstam, David. Playing for Keeps: Michael Jordan and the World He Made. New York: Random House, 1999.