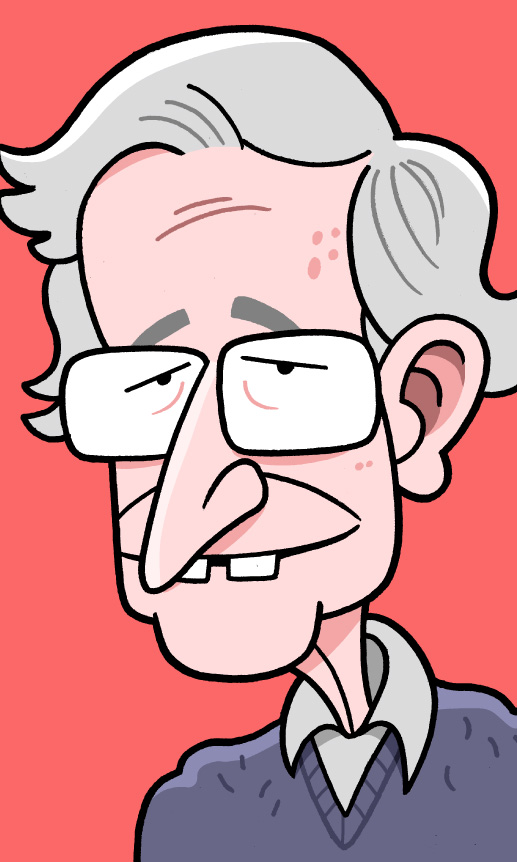 Chomsky dresses very casually and unpretentiously, and his trademark outfit is a heavy sweater, jeans, and running shoes.

Why is Noam Chomsky famous?

Noam Chomsky is world-famous intellectual in two distinct fields: he’s considered one of the most influential linguists of all time, as well as one of the planet’s most popular left-wing political writers and philosophers.

When did Noam Chomsky live?

Dr. Avram Noam Chomsky was born in Philadelphia, Pennsylvania on December 7, 1928. He lives in Tucson, Arizona.

What did Noam Chomsky do?

Born to Jewish immigrants from Eastern Europe, Chomsky was a bright, precocious child who was politically active from a young age. Entering the University of Pennsylvania at age 16, he was an avid student of linguistics and philosophy, obtaining a Ph.D. in 1955. Later that year Chomsky was hired as a linguistics professor at the Massachusetts Institute of Technology, where he taught until moving to the University of Arizona in 2017.

Chomsky’s revolutionary contribution to the field of linguistics centered around his observations that all human languages share certain structural similarities, and that all children learn languages relatively easily, even with little formal instruction. From this, Chomsky deduced that language is a basic biological function of the human brain, akin to seeing or smelling, and not, as previous linguists held, something human society invented entirely on its own. Articulated in scholarly studies like Syntactic Structures (1957) and Aspects of the Theory of Syntax (1965), this so-called “language organ” thesis of inherent language capacity is now embraced by most language scholars.

As a political commentator and philosopher, Chomsky’s fame began during America’s long war in Vietnam (1964-1975), of which he emerged one the country’s most high-profile intellectual critics. A deeply pessimistic observer of American politics and foreign policy, Chomsky’s thesis holds that the United States is run by a small elite who govern in a cruel and self-serving way, but go to great lengths to hide this reality. Elite control of the media results in the American public being constantly propagandized with patriotic lies about the United States being a force for peace and democracy in the world, when in reality the US government runs “a leading terrorist state,” waging vicious wars and crushing democratic movements.

Beginning with American Power and the New Mandarins (1969), Chomsky has authored dozens of books seeking to document the crimes and hypocrisies of America and its allies, as well as cover-ups and conspiracies in the US media. Consistently in demand as a speaker and commentator for nearly five decades, Chomsky remains one of the most iconic figures of American leftist thought, having influenced generations of scholars, writers, and activists.

Noam Chomsky is a mostly serious, gentle, and unpretentious man, with a calm yet forceful demeanor that matches the studious quality of his writing. An intimidating debater with a tremendous memory, he carries himself with a strong self-confidence that can border on smug. Slight and nerdy with a soft, emotionless voice, Chomsky has never been a terribly charismatic public speaker, though neither this, nor his increasingly advanced age has restrained his enthusiastic participation in speeches, rallies, and lectures all around the world.

Despite his considerable celebrity, Chomsky is famously generous with his time and patient with his fans, answering enormous volumes of email and generally taking seriously anyone who wants to engage with him, even the most crankish or conspiratorial. He can be aggressively argumentative and irritable towards critics, however, and viciously sarcastic and condescending in his rebuttals and put-downs. Like many commentators with fairly extreme political views, Chomsky has been known to engage in intentionally offensive hyperbole, and as an American Jew uniquely obsessed with criticism of America and Israel, his writing has been described as having a “self-loathing” quality.

Social and friendly, Chomsky has been close with a number of high-profile intellectuals over the years, including Howard Zinn (1922-2010) and Edward Said (1935-2003), but is mostly private about his personal life. In 2014, he remarried a considerably younger woman, after losing his first wife of nearly 60 years in 2008. A workaholic, he does not seem to have a lot of interests beyond linguistics and politics, and lives a mostly sparse lifestyle in which he largely ignores pop culture and entertainment. His favorite hobby is sailing.