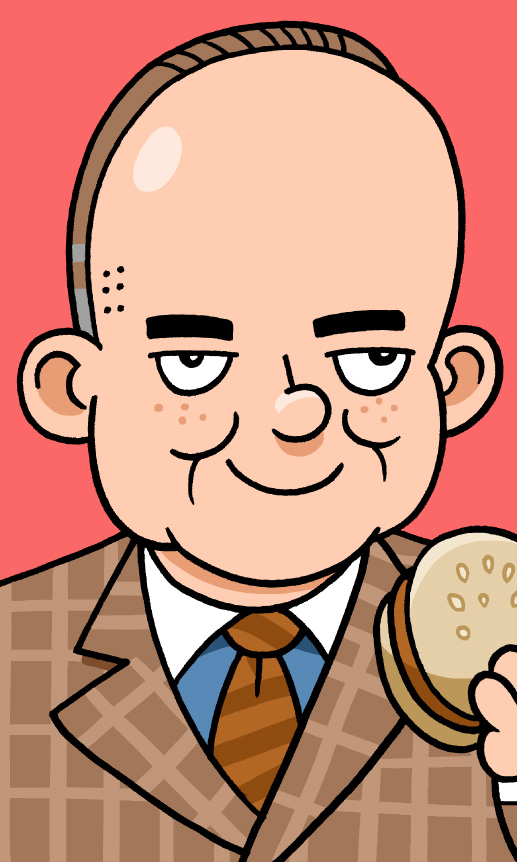 A stickler for formality, Kroc rarely appeared in anything other than a full suit and tie. He was always impeccably groomed, and wore fancy rings on both hands.

Why is Ray Kroc famous?

Ray Kroc was the founder and first CEO of the McDonald’s Corporation, the most famous and successful fast food restaurant chain in history.

When did Ray Kroc live?

What did Ray Kroc do?

Kroc dropped out of high school at age 15 and spent his first four decades of adulthood working as a traveling salesman, first of paper cups and then a milkshake-making contraption. During the 1950s, some of his biggest clients were fast-food restaurants, and in 1954 he visited one of his best customers, a small but hugely successful hamburger drive-in run by Dick McDonald (1909-1998) and his brother Mac (1902-1971). Sensing potential, Kroc befriended the McDonalds and was hired to open other McDonald brother restaurants across the country, beginning with a flagship Des Plaines, Illinois outlet in 1955. Under Kroc’s leadership, dozens, then hundreds of McDonald’s restaurants were opened in cities all over the United States, and in 1961 Kroc bought control of the entire McDonald’s Corporation from Dick and Mac.

Though Kroc did not invent the concept of franchising fast-food restaurants, he did put tremendous effort into setting extremely high standards for his brand in order to ensure that a certain, uniform “McDonald’s standard” would be consistent no matter at which of his restaurants you dined. This included a stable, affordable menu of high-quality burgers (including the iconic Big Mac and Quarter Pounder), sides, and drinks, extremely fast cook times, friendly service, and a clean, family-friendly environment.

Along with maintaining rigidly-enforced standards of quality, Kroc’s business model centered around maximizing the power of individual franchisee owners, who were able to open restaurants quickly and cheaply by leasing land purchased by the McDonald’s corporation, rather than having to front expensive property costs themselves. The company also made aggressive use of the new medium of television advertising to project a fun, wholesome image of the company, with mascot Ronald McDonald widely considered the most successful product pitchman who never lived. By the time Kroc died in 1984, there were more than 8,000 McDonald’s restaurants in dozens of countries all over the world. Today, there are more than 33,000.

Ray Kroc was a salesman by training, and had an outgoing, charming personality typically associated with a successful man of that profession. He was a charismatic public speaker, a folksy glad-hander, and a passionate “people person” with an excellent memory for names and faces. He was also quite sensitive and emotional, however, with a fiery, vindictive temper towards rule-breakers and those who wronged him.

A deeply conservative, traditional, and unapologetically “old-fashioned” man, Kroc was famous for being quite fussy and judgmental, particularly about cleanliness, grooming, thrift, and manners, all of which became key principles of the McDonald’s brand. Despite his bossy personality, Kroc was actually quite a hands-off CEO, and preferred to delegate large amounts of decision-making responsibility to other senior executives, and even individual restaurants. Indeed, when it came to food ideas, Kroc was actually notoriously unsuccessful, and most of the burger ideas he personally proposed — such as the infamous Hula Burger — were notorious flops.

Though never particularly obsessed with money, Kroc was a workaholic, which has been at least partially blamed for the breakdown of his first two marriages. He lived a mostly unpretentious middle-class lifestyle, and in his spare time enjoyed baseball, golf, bowling, and playing the piano.

“How McDonald’s Works,” How Stuff Works.