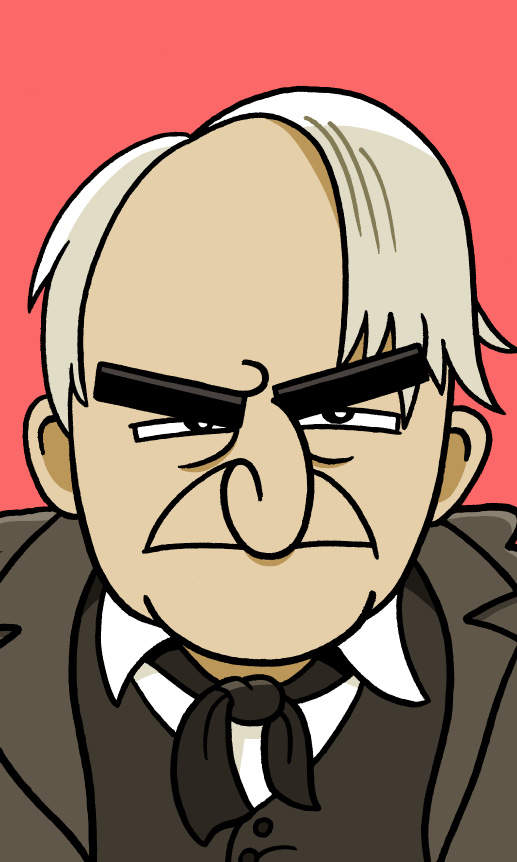 Too busy to care much about his appearance, Thomas Edison was usually shabbily dressed and had a somewhat unkempt hairstyle.

Why is Thomas Edison famous?

Thomas Edison was the most prolific American inventor of all time, and created, popularized, or perfected many of the most important technologies of the modern age, including electric lights, sound recording, and motion pictures.

When did Thomas Edison live?

What did Thomas Edison do?

Young Thomas Edison was obsessed with science and learning to the point where many adults worried he was mentally unsound. At age 15, he began working as a telegraph operator and promptly became fascinated by the technology — a marvel of its time. After quitting to focus full-time on telegraph inventions, in 1871 he created what is considered his first “major” invention, the Stock Ticker, a device which made it easier to share up-to-the-minute stock reports across the United States. He quickly followed up with two other devices: a telegraph transmitter and telegraph reporter (1870).

Commercial success from his telegraph devices allowed Edison to open large “idea factory” labs in Menlo Park and West Orange, New Jersey, where he and a team of brilliant assistants recruited from all over the world invented devices like the typewriter (1871), the telephone receiver (1877), the chemical storage battery (1872), the mimeograph (1877), and the wax-cylinder phonograph (1877). It was Edison’s 1879 debut of a practical incandescent light bulb, however, that earned him truly global acclaim. Not only did he perfect the production of a small, safe electric light that could burn for weeks, with the founding of New York City’s Pearl Street Station in 1882, the world’s first large-scale electric power plant, he also perfected an efficient system of providing homes with the large amounts of electricity required to power them. A few years later, with the financial assistance of J.P. Morgan, he founded the world’s first electricity corporation, General Electric (1887).

Though no invention would ever quite match the influence and importance of the light bulb, Edison and his team continued to create, perfect, and in some cases mass produce new technological marvels for decades, including the Kinetoscope movie projector (1889), the alkaline battery (1903), the cement mixer, and the x-ray fluoroscope (1896). Though some of his ideas were flops, many uninteresting, and others merely impractically ahead of their time, by the time of his death in 1931, Edison had patented more than 1,093 devices in dozens of fields, a record which remains unsurpassed to this day.

Thomas Edison’s personality was largely defined by his workaholic attitude and stubborn desire for success and perfection. He slept only a few hours a night (often at the lab) and strongly believed his successes stemmed from what he called his “stick-to-it-iveness,” or willingness to toil endlessly on a single problem until it could be solved.

As a manager, Edison had extremely high standards and low tolerance for mistakes, but carried himself in a humble and unpretentious manner. He was affectionate towards his employees, whom he called his “boys” or “muckers,” and enjoyed working alongside them on the workshop floor. Indeed, a large part of what made Edison such a popular celebrity was his “everyman” demeanor; he dressed sloppily, spoke casually, and defied common stereotypes of the uptight, egghead scientist. Near the end of his life, Edison was widely considered America’s most famous citizen and certainly one of the most beloved. He traveled the world and had some manner of working relationship with most of the other important inventors of his time, including Henry Ford (1863-1947), Harvey Firestone (1868-1938), and Alexander Graham Bell (1847-1922).

Witty and charming, Edison was a skilled and shameless self-promoter, but also a ruthless bully to his competitors — with the American gas industry and rival inventor Nikola Tesla (1856-1943) two of his most hated enemies. Never a particularly skilled businessman, he routinely lost money mismanaging his inventions for mass-market sale, usually due to his own stubbornness. Though generally easygoing and friendly, at his core Edison was something of a loner, and was too obsessed with his work to develop strong relationships. Despite two marriages and six children, he was a very distant father and a mostly disinterested husband.

Edison Muckers: Your Blog for Everything Edison, Everyday.