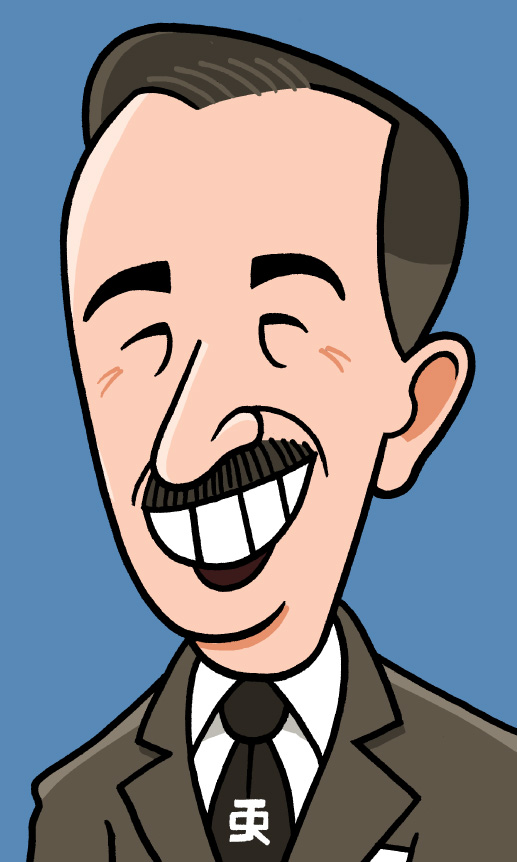 Walt Disney was well-groomed and sharply dressed, and nearly always appeared in a full suit. He would often wear a dark tie featuring the logo of the Smoke Tree Ranch in Palm Springs, his favorite vacation getaway.

Why is Walt Disney famous?

Walt Disney was the founder of the multi-billion dollar Walt Disney Corporation, and an enormously influential figure in the history of animation and children’s entertainment.

When did Walt Disney live?

What did Walt Disney do?

A gifted cartoonist from a young age, Walt Disney worked briefly as a freelance illustrator before turning to animation —a new and primitive technology at the time. At the age of 20, he founded his first animation studio and for the next 15 years produced a number of short cartoons shown in movie theaters before the feature film. Working closely with his brother Roy (1893-1971) and fellow cartoonist Ub Iwerks (1901-1971), Disney’s shorts quickly became popular with audiences of all ages for their lively artwork, sharp humor, clever plots, and charming characters, including Mickey Mouse, Minnie Mouse, Donald Duck, and Goofy. As the years went on, Disney’s shorts would proceed to achieve a number of historic milestones, including the first animated short with sound and music (Steamboat Willie, 1928), the first full-color animated short, and the first animated short to win an Academy Award (in both cases, Flowers and Trees, 1932).

In 1937, Disney’s successes with animated shorts inspired him to attempt another historic first: Snow White, the world’s first-ever full-length animated movie. Though critics were initially skeptical, the film’s beautiful animation, catchy songs, and fun characters made the picture a smash hit, and would inspire Walt to churn out over over two dozen feature-length followups, including Pinocchio (1940), Bambi (1942), Cinderella (1950), and 101 Dalmatians (1961). Beginning in the 1950s, Disney studios began producing live-action films such as Treasure Island (1950) and Mary Poppins (1964) to similar acclaim, as well as a host of nature documentaries and a vast array of live-action TV programs. Profits from these, in turn, allowed Walt to complete the last great project of his life: Disneyland, a 160-acre amusement park in Anaheim, California that brought the magical worlds of his imagination to the real world.

Today, the Walt Disney Company is one of the largest entertainment corporations on Earth, and continues to make millions every year on movies, television shows, theme parks, merchandise inspired by Walt’s characters and ideas.

Walt Disney’s status as one of the most beloved children’s’ entertainers of all time has made his life and personality the subject of endless gossip, with many assuming there must have been some hidden “dark side” to the man whose name was associated with so many jolly, friendly things. The truth was more nuanced. Walt was a generally good-natured man to his friends, and a close and loving father and husband, but a harsh and demanding boss. An obsessive perfectionist and micro-manager, his tolerance for mistakes was low and his expectations for employees high — he was not known for compliments or praise. A staunchly conservative Republican, he was decidedly unsympathetic to the union movement, and was something of a McCarthyite during the 1950s.

An often morose and moody man, Walt was known to struggle with depression and was often haunted by dark thoughts. His mother’s 1938 death in a freak accident — she died of carbon monoxide inhalation due to a leaky furnace in a house Walt had bought for her — was said to have particularly traumatized him, and helped contribute to his constant anxieties about his own mortality. Depression also gave Walt great joy in bringing happiness to others, however, and his love of children, fun, and whimsy was both real and deep.

For what it’s worth, there is absolutely no truth to some of the crazier rumors about the man — that he was some manner of Nazi sympathizer (his studio actually produced aggressively anti-Nazi cartoons on commission from the U.S. government), or that his body was cryogenically frozen and/or buried in Disneyland after his death (his Glendale, California grave is publicly viewable).

Gabler, Neal. Walt Disney: The Triumph of the American Imagination, 2007.