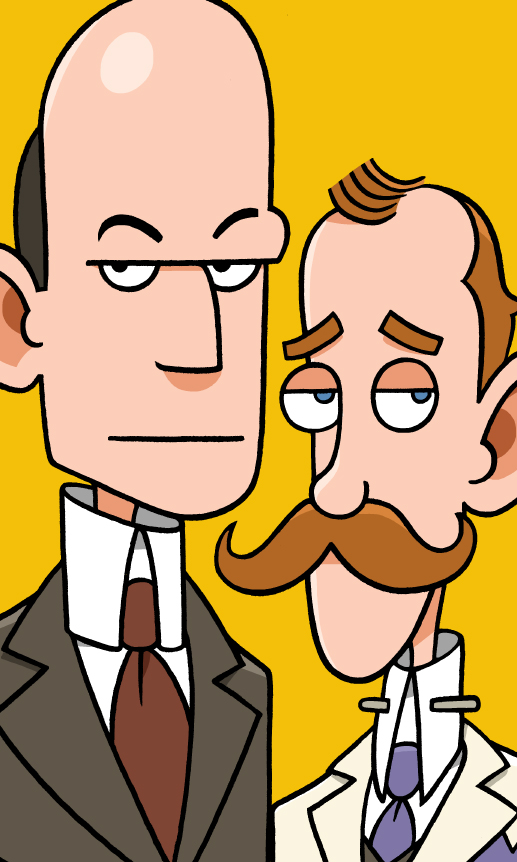 The Wrights were very formal men and rarely wore anything other than full suits, even when doing outdoor experiments on the beach. Orville, with the mustache, was the more fashionable and appearance-conscious of the two, with Wilbur sometimes borrowing his brother’s clothes for special occasions.

Why are the Wright Brothers famous?

The Wright Brothers invented the airplane.

When did the Wright Brothers live?

Wilbur Wright was born in Millville, Indiana on April 16, 1867. His younger brother Orville Wright was born four years later on August 19, 1871 in Dayton, Ohio. Their father did not believe in middle names. Wilbur died at age 45 of Typhoid fever in Dayton on May 30, 1912. Orville died in Dayton at age 76 of a heart attack on January 30, 1948.

What did the Wright Brothers do?

Born four years apart, Wilbur and Orville Wright were raised in a loving family that emphasized the importance of self-directed learning. Both dropped out of high school and neither went to college, preferring to instead pursue businesses opportunities where they could explore creative challenges. After running a newspaper, print shop, and bicycle repair and construction store, the Brothers became obsessed with the idea of building a workable flying machine — an idea of worldwide fascination and experimentation at the time.

Beginning in 1899, the brothers spent four straight years designing, assembling, and testing various kites and gliders on the windy beaches of Kitty Hawk, North Carolina before creating “Flyer,” a 600-pound, double-winged biplane with dual propellers powered by a lightweight aluminum engine. On December 17, 1903 the Wrights successfully flew Flyer for several short tests, the longest being a 59-second flight of 852 feet — an unprecedented human achievement.

Over the next few years, the Wrights continued to perfect their plane’s design and by 1905 had created an agile aircraft capable of flying uninterrupted for more than an hour. Though American interest was initially low, a high-profile 1908 demonstration in France made the Brothers overnight global superstars, and from then on their focus shifted to business. In 1909, they sold their technology to the United States military, and a year later they founded The Wright Company to mass-produce airplanes for market – though the firm would prove to spend more time suing competitors for patent infringement than plane building.

Wilbur died in 1912, and Orville lost interest in the airplane business shortly thereafter, letting others take control of his invention and company. He lived his final years as a wealthy and beloved “elder statesmen” of flight, and died in 1948 leaving a world transformed beyond recognition by his revolutionary invention.

The Wright Brothers were upright, polite gentlemen of great self-confidence and drive whose personalities were defined primarily by their unwavering devotion to hard work. In contrast to other flying machine inventors of their age who were often fantastical daydreamers, the Wrights were studious science-minded problem-solvers, and their success at Kitty Hawk reflected a talent for enduring seemingly insurmountable setbacks and obstacles. Their devotion was all the more remarkable given both men were entirely self-taught in the complex fields of physics and aeronautical engineering.

Though it was often said that the Wrights seemed to “share a brain,” the two men did have distinct identities. Wilbur, the elder, was more intellectual and outgoing, and usually acted as the leader of the duo. Orville was more open-minded and idealistic, but also quite shy, and tended to shun the spotlight — particularly after Wilbur’s death, when he became increasingly reclusive. Both were patient, formal, and — as sons of a preacher —religious. They never worked Sundays.

As two passionate men who took their work very seriously, the brothers fought constantly, and often erupted intro screaming matches over ideas. They did not hold grudges, however, and were said to actually enjoy arguing as a way to ensure their theories could survive hostile scrutiny. Romantically, both were basically asexual, and lived as lifelong bachelors who never pursued women. They were very close to their family, particularly their supportive father, Bishop Milton Wright (1828-1917) and their helpful older sister Katherine (1874-1929). In addition to engineering, they were great admirers of fine art, music, and architecture.

More information about the Wright Brothers

The Wright Experience: Discovering the Secrets of the Wright Brothers to Inspire a New Generation.